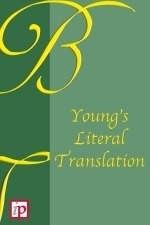 Young's translation is designed to assist students in the close study of the Biblical text by reproducing in English the Hebrew and Greek idioms, in an exceedingly literal translation.

This edition was designed for friendly display as well as optimal navigation on many electronic devices to ensure your reading experience. For easy navigation you can make use of navigation links. Navigating to your preferred chapter can be done though different ways. In just a few clicks, you can be reading any chapter in the Bible. Special attention was given to the design of the Bible text to optimize the reading experience.

Robert Young (1822-1888) was a Scottish editor and publisher who became proficient in several ancient languages through self-study. He received his education at private schools, 1827-38; served an apprenticeship to the printing business, 1838-45, using his spare time to study the oriental languages; became a communicant in 1842; joined the Free Church, and became a Sabbath-school teacher in 1843. In 1847 he took up printing and bookselling on his own account, proceeding to publish books that tended to further the study of the Old Testament and its ancient versions. He was a strict textual critic and theologian. His important work was the Analytical Concordance to the Bible (Edinburgh, 1879). Young was celebrated as an editor and translator of Jewish and Biblical writings in various languages, especially in Hebrew, Samaritan, Aramaic, Syriac, Arabic, and Gujarati, thus and in other ways contributing to the apparatus for textual criticism.

Dit boek is ook leverbaar via: